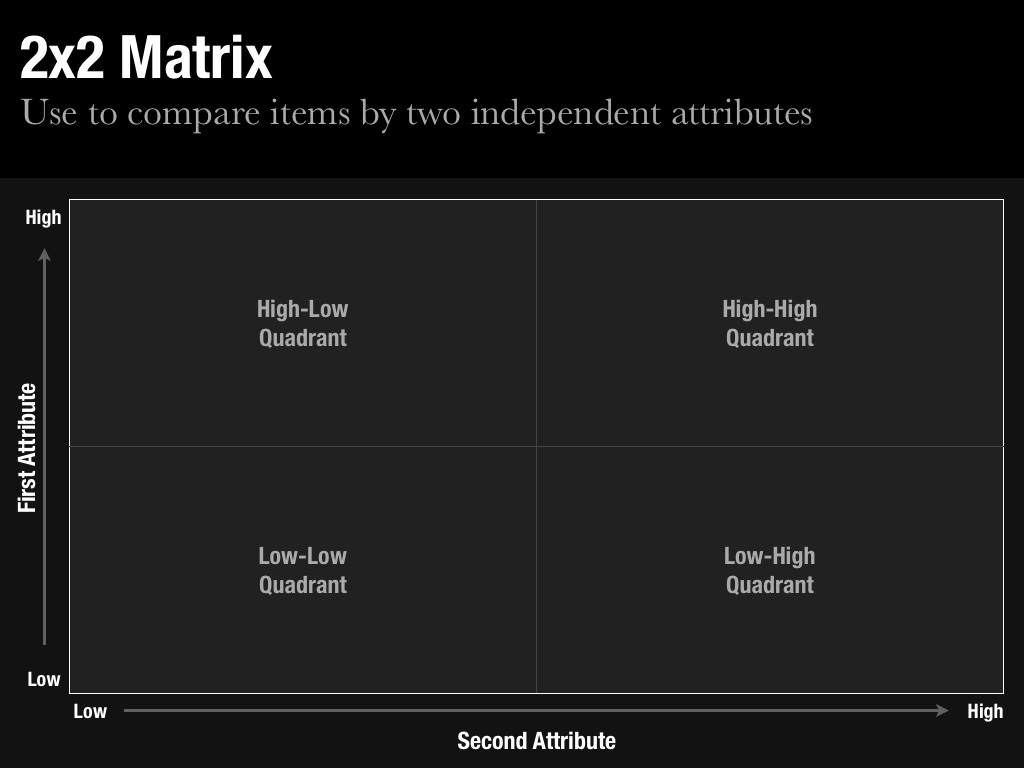 Use these 2x2 Matrix slides to present a matrix that compares items by two independent, discrete attributes. There are two slides available in this slide set: 1) a large 2x2 Matrix that fills the slide and 2) a smaller 2x2 Matrix that provides a bullet point area for an explanation.

The 2x2 Matrix is a common business framework that is used to compare items using two independent attributes each of which has two states. The resulting matrix categorizes items into one of four different buckets.

For example, one of the most well-known examples of the 2x2 Matrix is the BCG-Growth Share Matrix. This 2x2 Matrix is used to categorize a company's products or business lines by two attributes:

Tips for Using the 2x2 Matrix

The 2x2 Matrix is one of those rare frameworks which is both simple to understand and powerful to use. Even for complex concepts, a 2x2 categorization can often be more illuminating than a more complicated framework. Here are some tips to get the most out of the 2x2 Matrix:

A 2x2 Matrix is most effective when plotting two attributes that are independent. In other words, there should be little or no correlation between the two attributes. For example, in the BCG Growth-Share Matrix, the Growth Rate and Market Share of a business are usually unrelated.

However, lets consider using a 2x2 Matrix for a boutique coffeehouse. Imagine that we'd like to build a 2x2 Matrix presenting the different varieties of beans available. The first attribute we'd like to present is the color of the roast (light vs. dark) and the second attribute is intensity of flavor (low vs. high). In this case, Roast Color and Flavor Intensity are highly correlated -- lightly roasted beans have low flavor intensity and dark roasted beans have high flavor intensity. Our 2x2 Matrix won't be very useful since we'll only be using two of the quadrants (Light Roast, Low Flavor Intensity and Dark Roast, High Flavor Intensity). However, lets imagine that our coffeehouse specializes in a rare variety of bean that has a light roast but also intense flavor. In this case, the 2x2 Matrix may be the perfect way to show off our differentiated product.

Each of your attributes should be segmented into two, and only two, states: low vs. high, on vs. off, light vs. dark, small vs. large, etc. The beauty of the 2x2 Matrix is that its simple—it forces you to categories items into just four categories. This type of simple classification can highlight important aspects of whatever concept your presenting. If you are having trouble categorizing items by attributes with only two states, consider whether you need to change the definition of your attributes or whether you should use a different framework, such as the Quadrant Diagram, which provides for a finer grained segmentation.

3. Develop a Story for Each Quadrant

If you've selected two independent attributes and you're able to segment those attributes into two well-defined states, then you'll end up with four clear categories of items. You should provide each quadrant with a descriptive term as we saw with the BCG Growth-Share Matrix, and you should develop a story about each category and the items in that category. If you've developed a compelling story and can visually communicate that story with a clear 2x2 Matrix, you'll be well on your way to convincing an audience of your message.

Get the 2x2 Matrix presentation templates in a bundle with every other slide on this site for just one low price:

We think Slidevana will change how you do presentations for good, but the best way to see what Slidevana can do for you is to give it a whirl. Try it risk free and if you aren't 100% satisfied, just let us know.